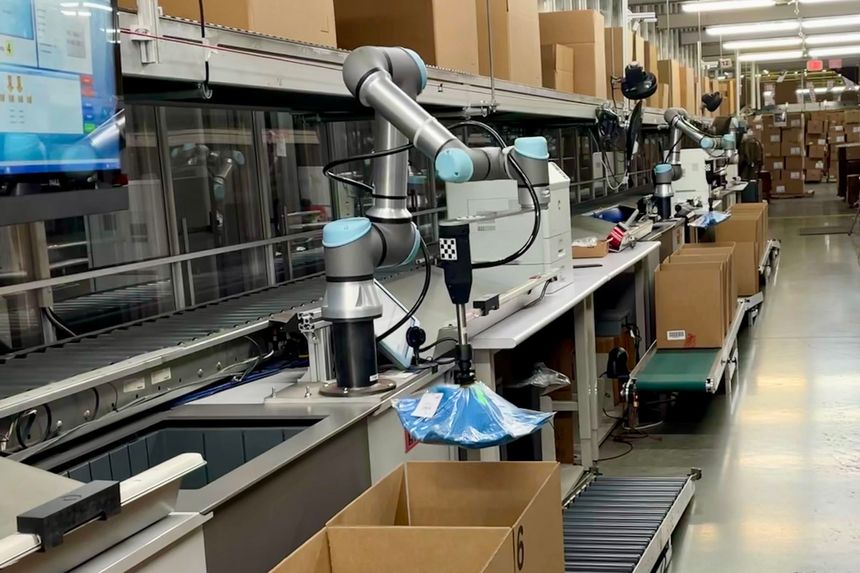 More robots that can pick up separate objects are moving from laboratories to warehouses as the technology improves and labor-strapped logistics operators look to automation to meet surging demand.

Businesses are using software-powered robotic arms to sort clothing and e-commerce parcels, pack bread and industrial supplies and, in some cases, pick electronics and consumer products from larger bins to prepare orders for delivery.

Experts say the technology isn’t replacing human workers anytime soon. But the latest steps show warehouse robots are evolving as the computer vision and software that guide them grow more sophisticated, allowing them to take on more tasks that have been largely done by people.

Puma North America Inc., a division of Puma SE, is using several robotic arms to assemble orders of clothing and shoes at a distribution center in Torrance, Calif.; the company plans to install more robots at another site outside Indianapolis. The technology from Nimble Robotics Inc., whose customers include Best Buy Co. and Victoria’s Secret & Co., uses a combination of cameras, grippers and artificial intelligence to pluck items from bins that another automated system delivers to workstations usually staffed by people. Remote operators are on hand to assist if the robot has trouble picking up an object.

The robots perform with about 99% accuracy, about as well as their human counterparts, and can run for two shifts straight, said Helmut Leibbrandt, Puma’s senior vice president of supply-chain management for the Americas.

“I believe automation is the future,” Mr. Leibbrandt said. “That doesn’t mean we reduce manpower … It’s pretty much a labor shortage which we face.”

Interest in robotic picking is up considerably in the pandemic as e-commerce orders have surged and competition for workers intensified, accelerating broader demand for logistics automation.

Greenwich, Conn.-based GXO Logistics Inc. is using a robotic arm equipped with camera vision to help speed up the order fulfillment process at a warehouse in the Netherlands.

The system, developed by Austrian logistics-automation company Knapp AG and AI startup Covariant for a GXO apparel customer, places manually picked items in an overhead sorting system that can store items in holding areas to ensure that items in an order that are picked at different times get to the human packer at the same time.

“The development opportunity is to be able to link the three things together”—the picking arm, the AI-enabled ability to identify and grasp objects, and mobility, said Phil Shaw, operations director for GXO Logistics Europe. “To move that down the aisles, that’s the future.”

Developers are still working out the kinks. Machines excel at repetitive tasks in fixed environments, but teaching them to handle different kinds of objects in warehouses has been a challenge.

One shortcut to help machines learn faster is a strategy used by Nimble and providers including San Antonio, Tex.-based Plus One Robotics Inc. in which humans keep tabs on the machines and take over if a robot fumbles.

“It’s possible we never get to 100% automation,” said Julian Counihan, general partner at Schematic Ventures, which he said invested in Plus One in 2017 because of the remote-monitoring approach.

Right now, using robots to pick orders makes most financial sense in 24/7 operations with a limited number of products, said Hasan Dandashly, chief executive of Atlanta-based Dematic Corp., a subsidiary of KION Group AG that is one of largest providers of logistics and manufacturing automation.

“The pace of adoption is still evolving,” Mr. Dandashly said. “I don’t think we are on the verge of not having human pickers anytime soon.”

Write to Jennifer Smith at jennifer.smith@wsj.com