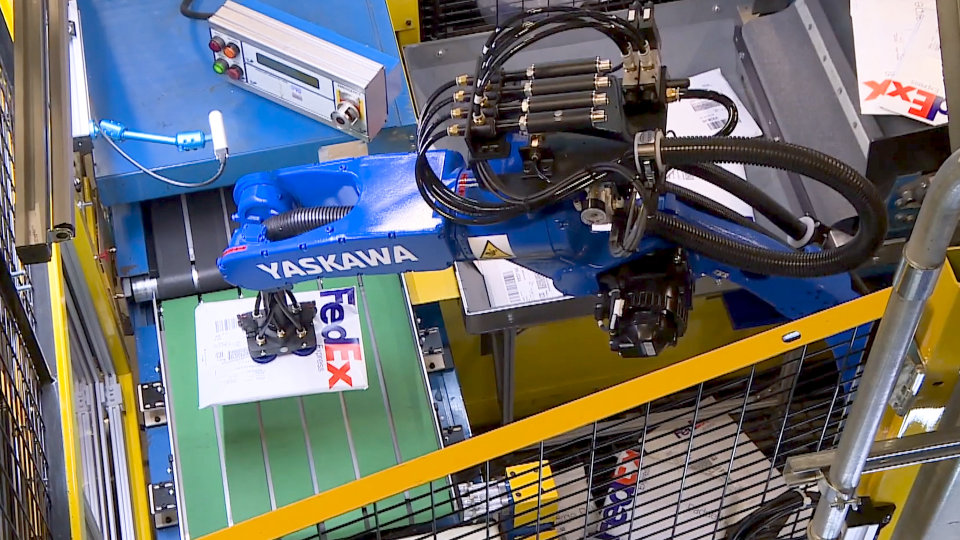 Nearly every company across every industry is looking for new ways to minimize human contact, cut costs and address the labor crunch in repetitive and dangerous jobs. WSJ explores why many are looking to robots as the solution for all three. Photo: FedEx

Sue, Randall, Colin and Bobby are four of the most reliable workers at the FedEx Express FDX -0.71% World Hub in Memphis, Tenn., according to their supervisors. Each clocks eight hours a day of steady work, sorting around 1,300 packages an hour from bins onto a conveyor—four hours on the day shift and another four at night. They almost never take breaks, but since they’re still learning on the job, they do regularly call on coworkers in the facility for help. Sue, for instance, has had some trouble with the soft bags in which clothing is typically shipped.

The four workers are actually 260-pound industrial robot arms. Manufactured by Waukegan, Ill.-based Yaskawa America, 6506 0.12% they are equipped with computer vision and artificial intelligence from San Antonio-based Plus One Robotics.

They work only about half as fast as skilled humans in the same roles, but they are quickly becoming an important part of the chain of machines and people that keep packages flowing through the world’s largest air freight facility, says Aaron Prather, senior advisor of the technology research and planning team at FedEx Express.

While companies such as FedEx Corp., Deutsche Post DHL Group, United Parcel Service Inc. and Amazon. com Inc. have long relied on billions of dollars worth of automation to get packages to customers quickly—from conveyors that divert packages down one path or another to guided vehicles that shuttle about entire shelves of goods—these robot arms are something different. They’re the first arms of their kind to ever appear in a FedEx facility, and among the earliest examples of the day-to-day use of this technology anywhere in the world.

These robots typify an important and growing trend in automation in general, and robotics in particular. What’s new here is that existing machines are getting both “eyes” and “brains” that allow them to sense and respond. For robots, this generally means the addition of cameras not so different from the ones in cellphones, which perceive visible light. Computer vision can also include sensors that use other technologies in order to perceive depth. Meanwhile the “brains” of the robot are built with artificial intelligence, generally some form of machine learning, a broad category that enables everything from Alexa’s understanding of our voices to systems that can teach themselves how to beat humans at board games. This AI gives existing robots and other machines a level of adaptability not before seen. In fact, the new flexibility and intelligence make them able, for the first time, to replace humans in some of the most common jobs in warehousing and logistics.

It’s not as if these robots are about to steal all the jobs in these industries, however. For now, they’re mostly filling vacancies created by surging demand and, where possible, giving humans a chance for promotion. For the foreseeable future, humans will prove more adaptable as work needs change.

Proponents argue that bringing robots into these roles is necessary for at least three reasons.

First, the explosion of e-commerce means an explosion in the volume of packages shipped to homes. About 87 billion parcels were shipped worldwide in 2018—that’s 40 a year to every person in America—and this volume will more than double by 2025, according to Pitney Bowes, best known for its postage meters. The number has grown much faster than expected during the pandemic. UPS said in the quarter ending in June, the volume of packages shipped from businesses to homes surged by 65% from a year before.

Second, with new and ongoing stay-at-home orders due to increasing Covid-19 cases, the availability of workers even for essential businesses is reduced. Third, the need for social distancing within warehouses and other logistics facilities means automation can play a role in helping workers do their jobs without being directly adjacent to one another.

Despite widespread unemployment, companies in the logistics industry are still finding it hard to hire people fast enough. FedEx’s air hub in Memphis currently has 500 job openings, says Mr. Prather. Even before the pandemic, warehouses and sorting centers had a labor crunch because many of the jobs in the industry are both physically demanding and dull, leading to high turnover and challenges with recruitment, he adds.

“This has never been about, ‘Can a robot beat a human?’” says Erik Nieves, founder of Plus One Robotics. “This is about how they’re a thousand people short every night in Memphis, and there is no alternative.”

Some of the humans FedEx and others do hire could take on higher-level supervisory roles, with less risk of injury, expanding the burgeoning sector of robot tech support.

FedEx currently has four of these robots at its Memphis facility, but the company estimates one human could tend up to eight of them, jumping in only when they have a problem they can’t solve on their own, like when packages get caught in a conveyor and block a sensor. Meanwhile, at the Plus One command center in San Antonio, people are on call to help guide the robot remotely when it encounters a package it can’t identify or some other logical difficulty, even before anyone is needed to intervene on site.

The AI that powers these robot arms is learning all the time, but there are always situations that trip it up and require human intervention. No amount of AI, at least of the sort that exists now, can handle every possible “edge case,” those unexpected situations which are individually rare but quite common when considered all together. This galaxy of edge cases is a major barrier to fully autonomous AI systems.

For any attempts to automate e-commerce, “the challenge is that humans are incredible,” says Bruce Leak, founding partner at venture capital firm Playground Global. “Twenty-five years ago Amazon didn’t exist,” he adds, “and today they have more than a million direct employees. People are trainable, flexible, resilient and intelligent, and automation and robots aren’t any of those things.” (Amazon currently has 876,000 employees, says a spokeswoman for the company.)

Mr. Leak is an investor in RightHand Robotics, based in Somerville, Mass., which makes a similar AI-powered, camera-equipped picking system. Its technology is used by a handful of companies, including Japan’s Paltac, a wholesaler of consumer packaged goods.

Many other startups have recently received funding or announced deals to sell robotic picking systems, including Covariant, Osaro, Dexterity, Pickle Robot Company, XYZ Robotics, Fizyr, Mujin and Dorabot. In addition, established systems integrators like Daifuku, Dematic and Honeywell bring together technologies from these startups and established makers of industrial robots, including Yaskawa, Universal Robots, ABB, Kuka, Fanuc and others.

Despite this flurry of activity, the overwhelming majority of industrial robot arms in the world are still the “dumb” kind: They repeat the same action over and over again—for example welding the same parts together repeatedly on an automobile production line. In warehouses where e-commerce orders are filled, most automation consists of various sorting technologies.

Amazon itself has yet to move robot arms into the human job of picking and sorting, publicly at least. While the company is an avid producer and consumer of robots that move shelves and help sort packages, Amazon still uses humans to accomplish the task of taking goods off of shelves or out of bins and putting them into other bins or on conveyors. The company’s enormous and quickly changing inventory still defeats even the best combination of AI, computer vision and gripper, says Brad Porter, vice president at Amazon Robotics.

“There will always be a need for people to support the automation in our fulfillment centers,” he adds. “We see new technologies increasing safety, speeding up delivery times, and adding efficiencies within our network; we re-invest those efficiency savings in new services for customers that lead to the creation of new jobs.”

While this technology is great for sorting packages, as at FedEx, and dealing with a limited range of items, as at Paltac, it’s possible that the holy grail of picking technology—a robot that can handle the same variety as a human—will remain out of reach for a long time, in the same way we have yet to create an autonomous vehicle that can handle the same variety of road situations a human can.

One reason for the sudden popularity of robots, says Mr. Nieves, is they are a way to do the same job as a human without completely re-engineering the inside of a warehouse. “These robot arms make a lot of sense,” says FedEx’s Mr. Prather, “because we can’t just tear down the building and say, ‘OK, everyone wait a year until we have a new one.’”

But when one of these big players does build a new facility, using the sort of technology that’s only become available in the past few years, things are different. For example, many of the warehouses where packages are sorted for FedEx’s ground service are newer than its Memphis air hub. These facilities are so completely automated with, for instance, smart conveyors known as “shoe sorters,” humans only touch packages when they’re brought into these buildings on trucks, and when they exit them on different trucks, says Ted Dengel, managing director of operations technology and innovation at FedEx Ground.

So until and unless every factory and fulfillment center in the world is re-designed to run “dark,” that is, without the involvement of any human labor, these uniquely challenging tasks will benefit from the human brain and body—or at least a reasonable facsimile.

—For more WSJ Technology analysis, reviews, advice and headlines, sign up for our weekly newsletter.

Write to Christopher Mims at christopher.mims@wsj.com